Ed Miliband: Give me a decade to fix Man Utd

In a bold statement of intent, the Labour Leader set out a 10-year plan to reverse the damage done by successive managers at Old Trafford. While many of his critics suggested that a ‘decent centre half and holding midfielder’ would be sufficient, a spokesman for Mr. Miliband insisted it would take a ‘long-term economic plan’ to improve results, ‘clone’ Ryan Giggs and change the word ‘Utd to City’ on all the stationary. 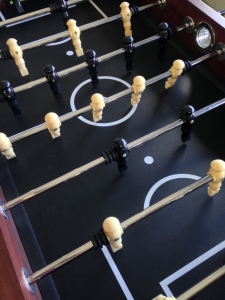 Ed is sure his fussball skills qualify him for the Premiership

Many in Westminster think Mr. Miliband should be more focused on national issues but Labour supporters have said solving the crisis at Old Trafford was a more ‘pressing concern’. One member of the Shadow Cabinet commented: ‘With Chelsea resurgent, Arsenal looking more balanced – Ed can’t afford to be complacent. Yes, we have a battling midfield presence like Ed Balls, but we’ve also got Ed Balls as a potential Chancellor of the Exchequer – quite frankly I’d rather leave him on the football pitch…he’ll cause less damage’.

Unveiling his vision of the future, Mr. Miliband’s spokesman made it very clear that it was ‘jam tomorrow…if by tomorrow you mean 3,650 days later’. In fact, many commentators are curious as to why Mr. Miliband needs such an inordinate amount of time to do his job properly. A spokesman explained: ‘Ed’s not the fastest learner. He sees himself more as the Special Needs Prime Minister. Deserving all the opportunities as any normal Prime Minister, but just with 25% extra time in exams’. By contrast the Mayor of London, Boris Johnson, has claimed that should he become PM he will require half the time ‘…to f@$k things up’.

Louis Van Gaal has already given a cautious welcome to the offer of ‘six national goals’ but said it would make no difference if Mr Miliband continued to ‘…ship more own goals’. In other promises Mr. Miliband offered to ‘…sort out your plumbing’, ‘resolve the problems in the Middle East’ and combat ‘the causes of ennui’ within a ten year window. However, it was clear that Man Utd would be his primary electioneering issue; a spokesman said ‘Ed knows what it can be like being Phil Neville – living in the shadow of a more talented brother. Equally he knows more than most how hard it is to follow a pugnacious Scot, who hangs on to power one season too long’.