By a strange coincidence Europe’s recent cutbacks to NATO spending, has prompted a shrill response from the military–industrial complex of the United States. US Military experts and diplomats are so aghast at reduced defence budgets, that the collective tightening of their sphincter muscles was mistaken for a Lockheed YF-12 taking off from an anus. 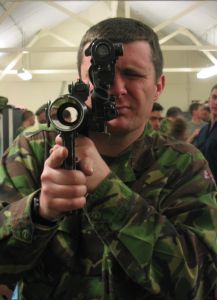 In response, US Ambassador Samantha Power immediately flew to Brussels with free copies of ‘Gun’N’Ammo Monthly’ and 2 for 1 vouchers on nuclear deterrents. A Pentagon spokesman confirmed: ‘In this era of terrorism, it’s important that we are armed with the most high tech weapons. God know, the terrorists are. Mainly because we sold it to them.’

Only the UK has maintained their commitment to a 2% GDP spend on NATO; although the Foreign Office admitted this was due to an obsession with gadgets, a failure to read the small print and ‘an petty attempt to annoy the French’. In the meantime US weapons manufactures are concerned that stockpiles of weapons will pass their sell by date; just like a yoghurt, Greek solvency or a Jeremy Clarkson apology.